"Do you mind if I watch Fringe in the living room kind of loudly?" asked my housemate.
"Depends," I said. "Do you mind if I spend the next hour dressing up my stuffed monkey like a crab and taking its picture?"
And then we both agreed to never tell anyone how we spend our Friday nights.

robin_pulaski 's Carry it in My Heart.  Actually, read it anyways, because it's awesome--funny, heartfelt, delightfully Shoeboxian in its execution--and then when you come back here, this still won't make much sense, but at least you'll be in a good mood from digesting some quality fic.  Go ahead, I'll wait.

So you know how, sometimes when you love something, you have no choice but to make tiny clay figurines of its main characters to send to the author as a "thanks for being amazing" present?  But then you're visiting your parents and they both work from 9 to 5 so there's nothing to do in the daytime but re-watch Marcel the Shell a few times and wander the house imagining the adventures that could befall a pair of Marcel-sized jewnicorns?  And then before you know it, it's 2 a.m. and you're stealthily wheeling the vacuum cleaner out of the closet so that you can take artsy photos of it?

Yeah, it's been that kind of week.

*sidles in awkwardly*
So, it would appear that I haven't posted anything here since September.  Of, um, last year.  How's it going, guys?  How's everyone been?  Anyone up for looking at some pictures of tiny clay things?  What if those clay things include gay wizards?

I stopped watching BBC's Merlin in the beginning of the second season, but every now and then, I get a pang of nostalgia for early Merlin episodes, back when princes were princes, wizards were wizards, and Anthony Stewart Head wore a shiny hat and was mad a lot.

solarcat05 wrote a series of fic about how the dragon totally has his own set of Arthur and Merlin action figures, and my course was clear.
( Collapse )

Hey friends!  Hope you all had an excellent summer.  A quick drive-by post of stuff I've been working on: 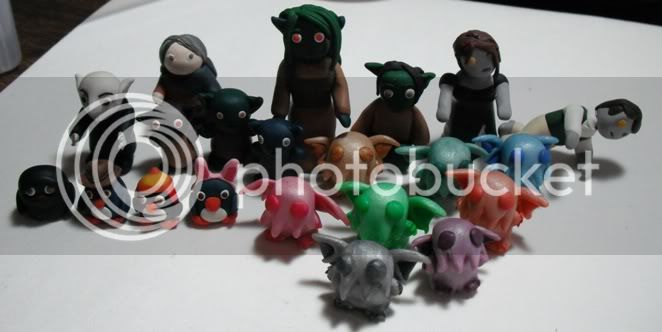 A fleet of monsters!

Doubling the number of cthulus to form what looks like a synchronized swimming routine!

We begin with a random anime shout-out. It's Jin from Samurai Champloo! I made him ages ago for

thenakedcat's birthday, and totally forgot to post any pictures.

Jin is unimpressed with my guitar tuner.

Anyway, so guess what the main theme of this post is.

Next week: plot bunnies, narwhals, and a tiny pie!

Friends, a new day has dawned. It is 2009 (I'm told it has been for some time), and as such, I think it is time to break down the barriers that have been holding us back. Anything is possible!

Ninjas and pirates can get along!

Draculas and wereyorkies can co-exist!

Nosferatau and law enforcement can...well, actually, they're still trying to kill each other.

So, after finishing little Eric Draven, I decided he needed a friend--just somebody to hang out with, who would have similar interests (crime-fighting, revenge, etc) and an equally creepy face. Only one man came to mind.

It's Rorschach, of Watchmen fame!

mordred_risika has been feeling ill lately, and likely needs some cheering up.  She is maybe the only person on the planet who might actually be cheered up by this, so here goes:

Chibi Crow hopes you feel better soon!  Otherwise, he may have to start beating up some germs, and that's bound to get ugly...

Wait a sec, who's that plundering my earrings?

On my dresser, there is a pink tin box filled with various penguins, necromancers, bandits, gods, demons, monsters, aliens, and barnyard animals.  It can probably get very crowded in there, and everyone needs a little fresh air sometimes.  This group shot was taken a few months ago:

For the most part, though, I keep them in a box.  Which is silly--I mean, it's not like I can appreciate them like that.

So I was thinking: if anybody wants anything in this picture, I'm selling it all, for $2 to $4 a piece.

It's all in pretty good condition.  (Thorley the goblin is still missing an ear, and in some kind of weird display of demon amputee solidarity, both demons managed to lose their right antler, but everything else is still in one piece.)  If you have any questions, let me know.  If you want to see any of the figurines more clearly, I'll find you the post where they first appeared.

Exceptions: I'm not selling the Dr. Horrible penguins, the Chinchilla mafia, or the De Yang Rabbit Clan.  The kiwi bird has already been given away.  The springtime critters of last post are also for sale, as well as the mermaids and the flying pig.
Also, I'm still not covering shipping & handling, which will be under $5 in the U.S.

I have a paypal account, and if you want to pay by check we could probably work that out as well.  I'll probably start sending everything out in early May.

This is all on a first-come, first-serve basis, so if you want to call dibs on anything, reply here.

ETA: Also, for a limited time, if you buy 3 figurines or more, I'll throw in a tiny sheep!
Collapse